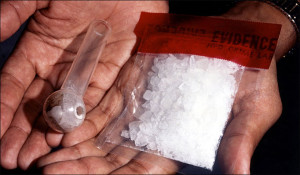 What is Meth?
Methamphetamine, generally called “speed,” “crystal,” “crank,” “ice,” or “tina,” (“shabu” in the Philippines and “yaba” in Thailand) is a potent psycho-stimulant that can be swallowed in pill format orally or delivered via intranasal, injection, or smoking routes of administration.

History of Meth
Immediately following World War II, meth was extensively used to reduce fatigue and suppress appetite. Following the war era, meth tablets, referred to as “work pills,” were widely used in Japan. In the late 1960s, meth became known as a dangerous drug that created substantial health threats to users, prompting the drug prevention slogan “speed kills.” Concerns about growing rates of meth use prompted the passage of the 1974 Drug Control Act, which drastically limited the medicinal usage of all amphetamines and virtually eliminated its large scale abuse. During the late 1970s and through the early 1980s, the problem of meth use in the U.S. was, for the most part, limited to several California cities (e.g., San Francisco and San Diego), since the primary manufacturers and suppliers of meth at the time were members of Hells Angels and other motorcycle gangs headquartered in California. In the mid-1980s meth use escalated dramatically in Honolulu as “ice,” a smokable form of the drug that was imported onto the island of Oahu from the Philippines.

Production & Distribution of Meth
Meth is not difficult to produce. During the 1980s there was a rapid proliferation of large and small clandestine meth laboratories in the southern desert areas of California, including San Diego, Riverside, and San Bernardino counties. Primary precursor chemicals commonly used for manufacturing meth include: ephedrine or pseudoephedrine, hydrochloric or hydriotic acid, ether, and red phosphorus, which were readily available from numerous sources. Since there were few or no regulations on the purchase of these chemicals, the manufacture of meth was a rapidly growing “cottage industry.” However, federal restrictions on the purchase of ephedrine in bulk during the early 1990s resulted in two major consequences for meth production. First, there was a change in the “recipes” used to make meth in the U.S., such that pseudoephedrine replaced ephedrine as the main chemical used in production. As a result of the switch to pseudoephedrine as a precursor chemical for the manufacture of meth, pharmacies and convenience stores around the U.S. became unwitting suppliers of the meth production effort, since pseudoephedrine is the active ingredient in many over-the-counter cold and sinus medicines (e.g., Sudafed and Nyquil). Federal and state regulations, as well as voluntary actions by many of the manufacturers of pseudoephedrine-containing medications, led to packaging modifications, giving rise to blister packaging of all products with pseudoephedrine, which are now sold in limited numbers. Some states have passed legislation that requires that all pseudoephedrine products are moved behind the sales counters in pharmacies and stores, further restricting access, although these political efforts have been slow. These strategies are believed to have increased the difficulty for meth producers to acquire adequate supplies of pseudoephedrine without drawing the attention of retailers and consequently law enforcement officials.

Secondly, there was a shift in meth production-based markets from the U.S. to Mexico, where ephedrine was still available with few restrictions. The emergence of large-scale meth production just south of the border in Mexico has had an unforeseen consequence. Mexican drug trafficking organizations with established routes, smuggling strategies, and highly trained personnel for transporting marijuana and heroin into the U.S. have added meth to their “product line,” which introduced meth into medium-size cities in the western mountain region of the U.S. (e.g., Salt Lake City) and the Midwest (e.g., Des Moines). Expansion of meth in these geographic areas has not only impacted the rising and spreading rates of meth-related drug disorders in the U.S., but also increased the power and impact of Mexican trafficking organizations and their ability to subsequently further extend their commerce with meth into the Southeastern U.S. 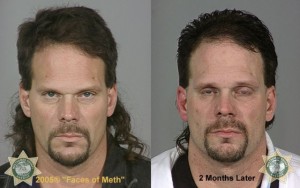 Who Uses Meth?
In the 2000s, meth has emerged as one of the most dangerous “homegrown” drugs in the U.S., and its clinical abuse and dependence poses significant public health challenges. Meth has not only been ranked as the most widely used illicit drug in the world after cannabis, it has become the most dominant drug problem in many Western and Midwestern U.S. states, severelhy impacting rural and suburban areas, as well as small- and mid-sized cities. In some states, meth has emerged as the most significant drug problem within the treatment system: treatment admission rates for persons aged 12 years and older have drastically risen over the past decade from 10 per 100,000 in 1992 to 52 per 100,000 in 2002; in 2002, 14 states cited that there were more admissions resulting from meth use than from heroin and cocaine use combined; and recent data reveal that meth admissions increased 10% between 2002 and 2003 (from 105, 754 to 116, 604). Similar trends have been documented in the health care and criminal justice system, as reports from emergency departments and medical examiners involving meth episodes more than doubled during the 1990s, and there was a steady increase in the percent of arrestees testing positive for meth across many geographical areas during this decade.

Meth has not only expanded geographically across the country, but also broadened demographically. Before the past decade, meth abuse was common among white males, with particularly extensive use among biker gangs and truck drivers. Currently, meth has become widely used by women, Latinos, gay and bisexual males, arrestees, and increasingly among adolescents.

Effects of Meth
Although meth has historically been used via intranasal route of administration, in the past decade, smoking meth has become the dominant route of administration, although in some geographic regions over 50% of users inject the drug. The timing and intensity of the “rush” that accompanies the use of meth, which is a result of the release of high levels of dopamine into the brain, depends in part on the method of administration. Specifically, the effect is almost instantaneous when smoked or injected, while it takes approximately 5 minutes after snorting or 20 minutes after oral ingestion. Immediate physiological changes associated with the use of meth are similar to those produced by the fight-or-flight response and include increased blood pressure, body temperature, heart rate, and breathing rate. Negative side effects include high body temperature, stroke, cardiac arrhythmia, stomach cramps, and shaking, as well as increased anxiety, insomnia, aggressive tendencies, paranoia, and hallucinations.

Prolonged use of meth may result in a tolerance for the drug and increased use at higher dosage levels, creating dependence. Such continual use of the drug, with little or no sleep, leads to an extremely irritable and paranoid state. Discontinuing use of meth often results in a state of depression, as well as fatigue, anergia, and some types of cognitive impairment that last anywhere from two days to several months.
Both short-and long-term health effects have also been documented. As noted, negative consequences of meth abuse range from anxiety and insomnia to convulsions, paranoia, and brain damage, but in addition to the many direct effects on meth users are the indirect impacts on individuals and society. Children of meth abusers are at high risk of neglect and abuse, and pregnant women ’s use of meth can cause growth retardation, premature birth, and developmental disorders in neonates. Finally, extensive evidence indicates that in many western US cities, meth is used extensively by gay males and is frequently associated with high-risk sexual behavior, a major factor in the transmission of HIV. Within this particular group, effective treatment for meth dependence may be one of the most important strategies in reducing the spread of HIV and other associated communicable diseases.